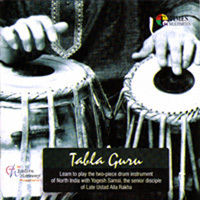 
Eastern Harmony brings you the Tabla Guru, with Yogesh Samsi.
The Tabla - Guru is part of the Music Without Boundaries series of instructional multimedia products.
The Tabla is a popular two-piece drum instrument of North Indian Art Music, the tabla is also the worlds most complex percussion instrument.
While two piece drum instruments have known to be in existence in India over the past 2,200 years, the first evidence of the tabla can found in the 18th century, when it developed as an art music instrument for accompanying the Khayal genre of North Indian vocal music. It has since developed into a multifaceted drum instrument with six major gharanas and several paramparas attracting many talented artists into its fold. In the middle of the 20th century, it also became popular internationally, primarily from the pioneering efforts of the great tabla maestros Ustad Alla Rakha and Pandit Chaturlal.

A Great Learning Tool.
In the Tabla Guru you will learn directly from Yogesh Samsi.

Indian Art Music.
Indian Art Music is a multimedia guide packed with information on the styles, evolution and theories of Indian Art Music. This accompanying reference CD-ROM is based on extensive research of eminent musicologists including Dr. Ashok Ranade and Dr. Adan Mistry. It accompanies the Bansuri Guru to provide a foundation for learning the Bansuri.
All Music in India has a long standing tradition and the term "traditional" can hardly be confined to one kind of Music. There are six types of Indian Music :

The Indian Art Music CD-ROM provides an informative companion to learning Art Music, specifically North Indian or Indian Art Music. It includes theory on concepts such as raga and tala, the profound and ancient history of Indian music, its various styles and types of musical instruments.
It also provides extensive information about the bansuri and the tabla. You can learn about the history of the Bansuri, its relationship with the Indian Mythology and its progression to mainstream Art Music. You will also learn more about the six major tabla gharanas as well as some of the great tabla maestros. In all, its extensively researched content includes an additional 60 minutes of audio, 15 minutes of video and a 120 word audible glossary of terms related to Indian Music.
System Requirements: Optional Requirements: