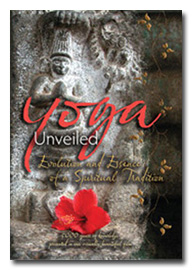 A Documentary by Gita Desai.

5000 years of knowledge presented in the visually beautiful film.

From the creators of Raga Unveiled this Stunning and Informative Documentary.

Yoga Unveiled, is a breathtaking journey of sight and sound that illuminates the essence of yoga as its creators understood it thousands of years ago.

Yoga ..... No longer an obscure discipline only practiced by mystics, yoga now occupies a central place on the world stage. Few practitioners, however, are aware of yoga's remarkable potential as a vehicle for personal transformation.

Yoga Unveiled is a unique look at the oldest spiritual practice in the world.

1. What is Yoga ?
The experts define yoga in their own words.

2. Origins of Yoga.
An overview of the formation of the yogic philosophy in ancient India.
Extensive commentary by Georg Feuerstein, Subhash Kak, and Edwin Bryant, the foremost yoga scholars.
Archival footage of the excavation of the Indus Valley Civilization, the birthplace of yoga.
An exploration of the Vedas and Upanishads, the ancient sacred texts which gave rise to yoga.

4. The Passage from East to West.
A biography of Swami Vivekananda, who introduced yoga to America.
Old photos, newspaper reviews, and Swami Vivekananda's speeches at the Parliament of Religions in Chicago.

5. Modern Yoga.
The life of Krishnamacharya, who preserved the ancient tradition of yoga and trained the greatest modern yoga masters, including his old footage. The biographies of Krishnamacharya's great disciples, Indra Devi, B.K.S. Iyengar, Pattabhi Jois, and Desikachar, including footage of each. The story of how each Yogi brought Yoga to the West. Insightful commentary about the place of yoga in the modern world.

6. Yoga and Modern Medicine.
Interviews with the pioneers in the field, including Dr. Dean Ornish, Jon Kabat-Zinn, Dr. Herbert Benson, Dr. Mehmet Oz, Father Joe Pereira, among others.
An overview of their alternative medicine programs.

Yoga Unveiled is graced by the soulful music of Ashit Desai. You can visit Ashit Desai's Mind-Body-Soul Collection on-line at One World Trading. You will find an eclectic selection of his CD's devoted to meditation and spiritual awareness. Ashit Desai creates soul-searching divine music using traditional Indian Classical structures along with modern elements.
Some recommended titles include: Divinity, Trinity, Eternity, Purity, Serenity, Mystical Om and Sacred Mantras of India.

For screening Yoga Unveiled for public viewing please Contact Raga Unveiled directly at ..... info@yogaunveiled.com to go through the Protocol.