Notes :
Special Edition Flutes .....
Natural Note, is listed with 'n'. Example, Special Edition Flute. C n.
Sharp Note, is listed as '#'. Example, Special Edition Flute. C #. G #.
The First letter of the Flute call out denotes the Tonic [ Indian Sa ]. Tonic is the Note played with Top 3 Finger Holes Closed.
The Second letter denotes the Key [ Western CallOut ]. Key is the Note played with all 6 Finger Holes Closed.
The Same Bansuri may be referred to by either its Tonic or Key.
For Easy to Follow Flutes CallOut. In PDF Format.

Pandit Pannalal Ghosh Style Flutes.
The inventor of the modern seven hole Bansuri was Pandit Pannalal Ghosh who died in 1960 at the age of 49.
His flutes were of a wider bore than the ones used by Pandit G. S. Sachdev, but also feature a seventh hole, set in a slightly different position.
They have somewhat larger finger holes as well.
This model flute is available in the Tonics : F #., F., Concert E., Concert D #. and Calcutta D #. - a note between E and D #. which is often used in India.
Pandit Pannalal Ghosh recorded using all these pitches. 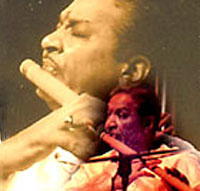 Pandit G. S. Sachdev Style Flutes.
Pandit G. S. Sachdev's flutes are much narrower than Hariprasad's and are designed to produce a full 3 octave range.
Because of the narrow bore, they favor the upper notes. Such musicians as Pandit Pannalal Ghosh and Pandit Vijay Raghav Rao, Sachdev's teacher, pioneered the use of the third octave on the bansuri, and this necessitates a narrower flute, somewhat similar to the silver flute in this respect. Pandit G. S. Sachdev performs on an F flute with seven finger holes, the lowest being fingered by the little finger of the right hand.
This design is available in the Tonics : F #., F., E., F. 4 Finger Holes.

Pandit Ronu Majumdar Style Flutes.
India's one and only Ace Flautist, Pandit Ronu Majumdar, plays in flutes which are wide bore, as the favor the lowest notes of the 2 octaves. His performances are very hypnotic and mesmerizing. Traditionally Ronu - Ji performs in 7 hole Bansuris.
This Style is available in Tonics of A., B., Concert E., Concert D #., D.
Occassionally, Ronu - Ji plays the Shankh [ Conch-Shell ] Bansuris in Tonics : A #. Shankh, A n. Shankh.
The Original Shank Bansuri is a Creation of my Guru Ji, India's Ace Flautist : Pandit Ronu Majumdar.